Yay–it’s a two-fer day! The BBT meme and a lovely bloggy event discovered over at Michelle Gregory’s : Beautiful Chaos! Join the fun on either one-the more the merrier!

Name a book or author that you truly wanted to love but left you disappointed. (And, of course, explain why.)

Francine River’s Redeeming Love. I tried my best to like this book–I really did, it was highly recommended by several friends and a book reviewers, yet each page was like pulling eyeteeth. (whatever eyeteeth are!?) The  main character of Angel came across as a spoiled…not-so-nice…heroine, instead of the seemingly tortured, yearning soul portrayed on the book jacket. I couldn’t stand the wimpy hero, though I had admired the plot and set-up, it all melted away by the time I read the end. I can’t quite put my finger on the reason, apart from it felt extremely artificial, with little emotion-reader-interaction (on my part) and the ending wasn’t the least bit satisfying. I have read other books by this same author though and they weren’t too bad, not my favorites, but not horrible either. ^_^ 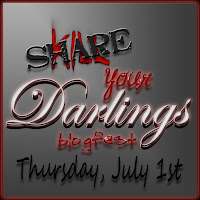 Author’s Ramblings: This is an excerpt from “Sky Knights” a fantasy piece I’ve worked on and off with for the past four years, featuring Keara, a new training recruit at the academy where students learn to work with/and ride giant birds. Keara has runaway twice, leaving her mount, Horace behind each time. When she’s returned to the academy the second time, her first meeting with Horace is during their monthly grooming session. I can’t seem to fit it in with her personality–but I can’t bear to leave it out either as it shows a different side of her. Horace is similar to a hawk in coloring and appearance, just about a hundred sizes bigger. ^_^ Cheers! (and thanks for reading!)

“Horace.” I spoke with the most sarcasm I could muster. I couldn’t see his face from the ground, so I’d try being nice first. It was the easiest thing to fake. “If you don’t want to take a bath, I’ll tell Eda. Don’t worry, I won’t make you do anything you don’t want to.”

Horace’s beak was suddenly inches away from my chest, my vision obscured by the giant black triangle. I double-checked asking him if he took breath mints and decided against it. “What? You know, a Zhargon is better than you-at least, they have a sense of honor, that no matter what the relationship between them and their handler, they routinely show up to complete their daily ritual-”

He growled and before I could react, snapped me up in his beak and started upwards.

This wasn’t how my first flight was supposed to be.

The wind and his beak cut sharply into my delicate self as my body reacted with training I would never forget. Hands twisted and feet moved, I felt for the soft spot on his beak and pressed as hard as I could. It opened enough for me to fall outward and swing up so that I was hanging from his beak, staring down at his very, very big feet.

By let go, I mean, he opened his big mouth, I lost my grip and plummeted towards the grassy ground.

My impending doom—the swiftly rushing ground—was countered again by my natural reflex to danger. This was the automatic response from my old training. Falling from this height wouldn’t kill me…much. The possible downside of a smooth landing was obvious—unwanted spectators. I was also aware of something big and winged rushing to my supposed rescue.

I curled into a ball, speeding my rate of descent to throw off the well-meaning rescuer. Before the ground rushed up, I twisted, using the momentum to counter gravity’s insistence as I smacked into the ground and then sprang up to my feet. I’d pay for it later, but it was enough of a jolt to jumpstart my brain.

What kind of class forgot to teach their students how to fall from killer heights? It must have been a session I’d missed.

On my feet, with every ounce of temper, I threw it upwards at Horace. “Horace, you blockhead! What are you trying to do, kill me? You almost succeeded! If you want me dead, say so and I’ll jump off a cliff! Next time you do that, I’m going stuff sticky tape between your toes and make sure it stays there!”

The threat may have sounded silly, but sticky tape was a popular tool in Zhargon training—and extremely difficult to remove, those who speak of it generally knew how to use it. For Horace, a large bird being unable to use their fierce, powerful claws—unheard of!

Horace landed and though I doubt anyone else would’ve agreed with his next actions, he gave in.

He didn’t fight. He didn’t protest, he didn’t say anything. He just landed, hunkered down and bowed his head in submission.

I glared at him for a half minute longer, then pointed to the slot near the wall. “Over there. Now!” I hosed him down, testing the water for it to be mildly warm and doused him thoroughly from beak to tail.

He set me on his back so I could scrub with the huge soap sponge. Whatever had possessed me to follow through, I don’t know. I did know that there would be no more temper tantrums-at least on Horace’s part.

I didn’t have the patience or the lifespan to deal with them.

I took my time, scrubbing gently and carefully, per Master Ian’s orders. I didn’t realize we had an audience, until I told Horace I needed the hose and looked down to see how he’d pick it up.
Master Ian, Eda and half of the class stood at the entrance of our slot, watching. “Horace? Down.” I looped the bucket handle over one arm and caught hold of his beak as he lowered me down to the ground. “Master Ian?” I gave a half-bob of my head.

Horace nudged me gently, the hose gingerly held between his beak. I smiled and thanked him, beginning to fill the bucket.

“A word when you are through, student.” He said briskly.

I smiled as politely as I could, as if it was perfectly normal to be the center of attention for my own stupid luck. “Of course, Master Ian. Horace, up!”

When I finally dared to peek down,the audience had dispersed except for Eda checking up on Sadie and Regis.

I hoped Sadie was all right. She was practically the only being who didn’t think I was a klutz or a brat.

When finished, I gave Horace a last rinse and then beckoned to him to bend down again, he did, wary as he eyed me from the left.

I wrapped the hose around one arm and studied him for a minute. “See? That wasn’t so bad was it? Now you look all shiny and handsome.” Before I could talk myself out of it, I leaned forward and kissed his beak before turning back to the hose.

A spray of water soaked me again from head to foot. He ruffled his feathers with a pleased expression on his avian face. “Very good, Horace.” I said dryly. “Now I need a bath.”