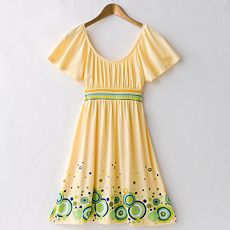 This week’s Friday Fiction is hosted by the talented Yvonne Blake over @ her blog, My Back Door. Click here to read and share more great fiction!


Author’s Ramblings: I have homework. And tests. And finals…and oh yes, this is dead week. LOL. No, am not quite dead–but my brain is pretty scrambled as far as fiction is concerned. This was supposed to be an Easter piece, but I don’t think it quite came out the way I wanted it to. Still, it’s a bit light and fluffy, ’cause I wanted to write about these two. Enjoy the read!
“Is she back yet?” Camille grabbed at the tassels hanging off of her grandmother’s slippers. It was more of a distraction than a game as she lay on the front porch, making half-hearted swipes towards the puffy blue pom-poms as her grandmother rocked back and forth on her ancient rocking chair.
“No. If she was, I’d have heard it and you wouldna be asking.” Grandma Luna turned the page of the morning newspaper with a deliberate calmness. “Stop doing that.”
“But I’m bored!” Camille whined, rolling over to lie on her tummy, propping up her chin with two hands. “It’s Easter and I’m not doing anything at all.”
“Anything like what?” Grandma Luna muttered. “Cavorting around in fancy new dresses you can’t afford, chasing plastic eggs with candy?” The older woman gave a rather unladylike snort. “That’s not what Easter is about.”
“I know what Easter is about.” Camille sniffed. “It’s about Jesus rising from the tomb and bucketloads of hope.” She thumped her head lightly on the wooden porch. “It’s also a holiday where people get off work and can come home.”
“She’ll be home when her shift is over. You know they don’t close stores like that for a simple holiday.”
“Easter’s not a simple holiday, Grams.” Camille murmured. “And I really am bored!”
“Then why don’t you go into the kitchen and-”
“Not that kind of bored!” The eight-year-old hastily interrupted. “I just mean…I wish she was home. Is she back yet?”
“She isn’t back yet and I doubt she ever will be!” The growled words came from the second rocking chair to Grandma Luna’s left. Grandpa Berr was stirring from the threads of his usual afternoon nap and their voices had been the trigger to bring him back to life.

“Good. Then we’ve established that it is none of the above which leads us absolutely nowhere.” Dami caught her younger sister by the shoulders, holding her up to look her straight in the eye. “You know what it’s not, so tell me what it is. You can’t hate something unless you know what it is and what it isn’t.”
Camille glared at her.
Dami pulled her into a hug. “and if you don’t want my theological side to come through, why don’t you tell me what’s really wrong?”
“I don’t wanna leave Grams.”
“And Gramps?” Dami added, helpfully.
Cami buried her face in the soft black shoulder. “’specially Gramps.” She hiccupped. “I don’t wanna go anywhere! I want to stay here. You’re always in Bible school, Mom’s always busy and Dad doesn’t even come-”
“Things changed.” Dami looked up as Grandma Luna handed over the box of marshmallow peeps. She took one of the treats and folded it over, holding it up to Camille. “It’s different now. I’m doing an independent study on Biblical archaeology finds, so I’m at the dig most of the time—right there with Mom and Pop. It’s kind of quiet and boring without you around.”
Small hands fisted in Dami’s shirt, Camille accepted the sweet treat, tears still trickling down her chubby cheeks.
“We’re going to come visit for Christmas though, so it’s not like you won’t see Grams and Gramps again.”
Grandpa Berr snorted.
“I also brought a laptop and a webcam.” Dami winked. “The hours I can spare are for setting it up and explaining how things work. I know Gramps will pick it up quick, that way we can stay in touch a little easier.”
“Really?” Grandma Luna gave a teary smile.
“And guess what? Josh is even there.” Camille stirred at the mention of her older brother.
“He is?” Grandma Luna placed a hand over her heart. “I’m so glad.”
“Yeah. He gets on my nerves a bit, but he says that he’s turned over a new leaf and all of that. Mom and Pop are okay with it, so he’s coming to stay for good. We’re all together now—‘cept for you, Cami.” Dami poked her cheek with one finger. “We’re all waiting for you.”
Camille looped her tanned arms around her older sister’s neck. “I don’t hate Easter.” She whispered.
Dami’s laughter rode on the wind as the sun began to set.
© Sara Harricharan