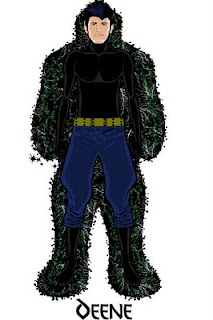 Just popping in to leave a few notes and fun stuff now that this wonderful writing adventure has come to an end. Firstly, my special thanks to each and everyone of you who took the time to comment/read/encourage me. (To all of my email readers-THANK YOU! I know you’re reading this–please know how appreciated you are!) This serial-randomness-scribbles has taken a year to complete from the time of imagination to the actual final post at 3AM last night. (er, right, you probably didn’t care to know how late I was up spacing paragraphs)

The lengths have been ridiculous (never below 1000 words, lolz) and the plot rather twisted. But, it’s been such fun writing this and hearing from everyone about how much they’ve enjoyed the adventure. I thought I’d take the day after to reflect on the experience. If this makes no sense–sorry, that 3AM bedtime kinda has me in a happy dreamland reality. ^_^

Now, onto the fun stuff! A few random facts about the story, the plot, the characters and some *drumroll please* pictures! Since Eira’s original image, I’ve had requests for other characters and suggestions towards their wardrobe. I took some time today to puzzle through the requests and ideas, and am posting the ones most frequently requested, the DP, Nimbus and Deene. Hmm, seems the guys are a bit popular. To make up for it, I’ll include Eira in her formal wear, how’s that? (And yes, there will be commentary!)

-Yes, yes, I know…how ridiculous, considering it has ended at 55+ chapters.

-This is why he’s tall sometimes and then shrinking the next, before I established the rebirth cycle, which would account for his wonderful shrinking abilities

-How he turned into a Lyrith, I sure don’t know. Will I write a Hydra story? Probably. Sooner or later. ~_^

-I actually ended up with a spin-off side story on how she turned queen and decided it wasn’t worth the hassle of making her a villain in this story. She’s still a pretty controlling and possessive character though, which works as villain material in her side-story bit.

-Don’t know. I didn’t plan on him either. He just sort of appeared and decided he wanted to be the DP’s friend.

-Yes. She was originally just a ball of energy in his coat closet. Somehow she turned into an energy person with a huge ‘tude.

-Because every dark side needs a light side, even when the light side is empty-headed, irritating and clueless. I had fun making a “light” that didn’t have any grounding at all. Poor Sorora. But she’s a character I’ve saved for later use, so she might just make an appearance again someday.

-Two words. Water Sports. It wouldn’t have worked with the little things like water wrestling and food conversion.

-When I find him, I’ll ask him for the short version. It’s a long story. *ducking*

-only micro-edits, which are typos/spacing errors that I correct when I can spare the time to reread what’s just been posted, or some dear person has brought it to my attention. Every single installment was posted as is-right when I wrote it out of my brain. This is why it’s choppy, kind of iffy and sometimes a bit random or brilliant. ^_^ When I edit, things turn out much better, and yes, there is an edited version I am working on.

And enough rambling-onto the pictures!

This is Deene in his “black rock” form, and you can see some of his nature/guardian powers from the fabric energy of black/green behind him. Yes, he is that skinny and yes, this is a rare moment when he is wearing a belt. 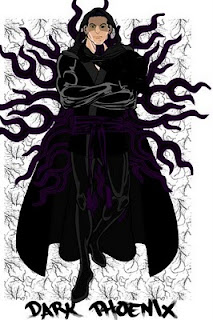 This is a tentative “After” picture of the DP, after his rebirth/transformation. His signature black stick isn’t included, because his arms are crossed. I have a few more concept pieces half-done for his after-image, so this is only ONE of a few. Please don’t let it ruin your mental image if your imagination did a better job. ^_^ 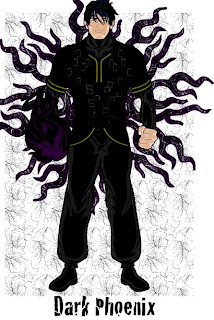 This is the “Before” version of the DP, when he first meets Eira on Vanderoone. Yes, he is minus-cape and cloak. Yes, his powers are black with a tinge of purple. This is because of Eunice and her influence. 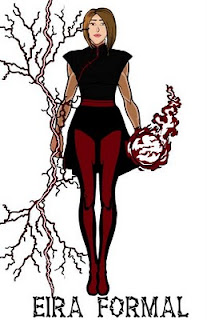 This is Eira’s plain formal, in red. She does have a black and gold version. I couldn’t cut off the leggings the way I wanted them, but otherwise, yes, she is barefoot, just imagine that instead of the red feet. 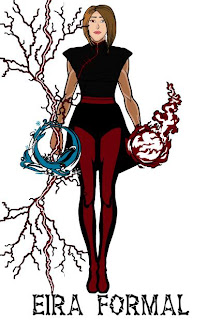 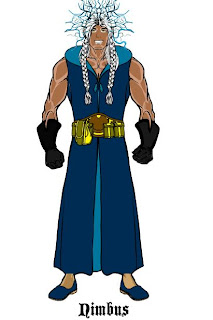 This is Nimbus. I can’t show his hair completely, because it’s hidden behind his outfit and the blacksmith’s apron wouldn’t layer properly with his belt. But, you can see the sparks leaping off his head when he is royally ticked off. 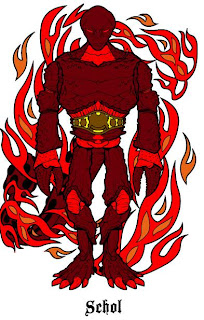 This is Schol is his solid form. My descriptions were rather lacking (now that I re-read and attempt to micro-edit, and yes, I’m doing both at the same time. :-P) His claws are scythes, the lower half breaks off and lengthens into a large black blade. He can’t use his pincers when in his human host, so the scythes are what come out to play.

And that’s all folks! I hope this was amusing in one way or the other. Thanks for reading and have a great weekend! If you’d like to see a specific character, leave your request in a comment below or email me and I’ll see what I can do. If you have any other questions…do the same. ^_^

There will be a brand new story up next week and as promised, it will not have anything to do with fantasy worlds/superpowers/and other random bits of sci-fi. I’ll only say that it shouldn’t take me a year to finish it/start it and if I’m running late, then I’ll post a short something instead.